Do you Remember Captain Chesapeake? 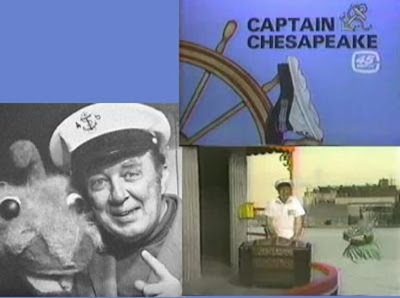 I was thinking back to the days of my childhood when you finished school and headed home to watch great programs like Speed Racer, Land of the lost and Captain Chesapeake. I still remember Mondy the Sea monster, Andrew Claws the lion and Bruce the bird. I always wanted to see that bird!!! Nonetheless, I hope this triggers a few memories of days past.
By the mid '70's, "Captain Chesapeake" boasted more than 50,000 card-carrying "crewmembers," and the station received as many as 3,000 letters to Lewis a week. At the end of each program, the good captain would encourage his youthful viewers to "be someone important--be yourself," then he followed with his signature sign-off, "so loooonnnnggggg
The Captain Chesapeake show began with the poem: "A shipwrecked sailor found himself in a plight. Lost at sea he was really a sight. He swam and swam 'til he thought he'd die, when a wondrous sight appeared to his eye. A derelict boat that saved his life and put an end to his watery strife."
The theme song was the Bob Crosby Tune "Stumbling" by The Three Suns.
From Wikipedia, the free encyclopedia
Captain Chesapeake was a morning and afternoon children's show on WBFF (channel 45) in Baltimore, Maryland hosted by George A. Lewis ( born:November 24, 1926, died:December 18, 2000 at Lutherville-Timonium, Maryland) who portrayed "Captain Chesapeake". The show aired from April 1971 - 1990. Lewis hosted a similar show, Captain Pitt on WPTT (channel 22) in Pittsburgh, Pennsylvania (which is now WPMY and is owned and operated by Sinclair Broadcast Group, Inc., the same group that owns and operates Baltimore's WBFF). Lewis began his career as the children's host of the Steamboat Bill and Mr. Cartoon shows on WSAZ-TV in Huntington, West Virginia from 1957 until 1970. Lewis also acted as Ghost Host on WBFF's late night horror movie show, and did news on WBFF prior to 1988.
Posted by Dina Baxter's Blog at 6:56 AM