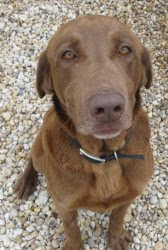 Folks,
You know I'm partial to Labradors!!!
Storm is a 2-year male chocolate lab. He is a very nice dog that just wants a family to come get him.He knows his basic commands and is willing to learn many more.Come and visit Storm you won't want to leave without him.

What will 2010 bring in the Real estate Market? Will it be better?

There's little doubt that 2009 was a brutal year for many in real estate while for others it was a buying opportunity. Foreclosure filings reported by RealtyTrac topped 300,000 per month for much of the year while the National Association of Realtors says that a typical existing home sold for $173,100 in October, down 7.1 percent from a year earlier.

There's also been good news. Interest rates fell below 5 percent and NAR reports that home prices actually rose in 30 metro areas during the third quarter. Home prices also fell in 123 areas, but a recovery — if there's to be a recovery — has to start somewhere.

What about 2010? Where are we headed? Here are the views of one observer — someone who admittedly is not a trained economist, Nobel laureate, high-ranking government official, soothsayer or seer.

Foreclosures & Modifications
Since it first began tracking foreclosure activity, RealtyTrac says no month was worse than July 2009 when foreclosure filings topped 360,000. Happily, the monthly numbers then retreated for the rest of the year.

Fewer foreclosure filings sure seems like good news, but lender actions against borrowers have stalled, not ended. Foreclosure activity is being delayed, deferred and put on hold with foreclosure moratoriums, legal challenges and loan modification efforts.

The biggest loan modification project is the federal government's Making Home Affordable program. If a borrower passes a three-month test period then the trial loan terms are converted into permanent financing. At the end of November just 31,382 mortgages nationwide had been transformed into permanent status under the program — that's out of 3,299,780 loans which were at least 60 days late.

“Borrowers in the government's Making Home Affordable program are in a kind of financial neutral zone,” says Jim Saccacio, Chairman and CEO at RealtyTrac.com, the leading online marketplace for foreclosure properties and data. “Owners will not be foreclosed, and lender books will not show additional lost properties while properties are in the program. The result is that foreclosure stats after July started to contract at precisely the moment when three-month trial periods began to get underway in serious numbers.”

Option ARMs
With an option ARM, borrowers elect how much they want to pay each month during the loan's “start” period. Typically they can pay at the 30-year fully amortizing rate, a 15-year self-amortizing rate, on an interest-only basis or at a base rate which does not even cover monthly interest costs. The interest not paid is added to the outstanding principal amount, a process called negative amortization. After the start period ends, the loan is then “re-cast” so that the remaining loan payments are large enough to pay off the loan during the remaining mortgage term.

Fitch says the typical new payment will increase 63 percent above the minimum monthly cost for principal and interest that most (94 percent) option ARM borrowers have been paying. Some payments will double.

As a result of falling home values, most option ARMs cannot be refinanced unless borrowers put more cash into a property. As well, many option ARM borrowers will not qualify for federal help because the value of their loan exceeds the value of their property by more than 25 percent. The bottom line: Huge numbers of option ARMs scheduled to re-cast in 2010 will add to foreclosure totals.

Interest Rates
The going rate for T-bills maturing in January and February has actually been -0.3 percent according to Canada's Globe and Mail. If someone invested $100 they would get back $99.70. That's an assured loss even before we get to inflation and reduced buying power.

The flight of investor capital raises three points: First, it's hard to imagine how much lower interest rates can go so this seems like a very good time to finance or refinance real estate. Second, mortgages and other forms of financing have gotten more difficult to get as credit has contracted. Third, when negative rates end the inevitable result will be higher mortgage costs — and more foreclosures as monthly expenses rise for virtually all adjustable loan borrowers, not just those with option ARM products.

The Courts
Successful challenges to the mortgage lending system have been rare, but the numbers are growing. In a small number of federal and state courts during the past year, loans were canceled by judges when investors could not prove ownership or were found to have violated newly enacted state foreclosure laws. No less important, during the summer the Supreme Court in the Cuomo case broke the federal monopoly on mortgage oversight by saying that states have some authority over loans originated by federally regulated national banks and their mortgage subsidiaries.

Look for a litigation explosion in 2010, especially broad cases by state attorney generals. Look for more wins by the foreclosure defense bar. In particular, look for something new: Court challenges to the holder in due course rule, a legal concept which has made mortgage loan owners virtually immune to claims of origination fraud.

As a counter-balance, look for lender efforts in Washington to enact new legislation which would strip the states of any oversight rights gained from the Cuomo decision.

Unemployment
In November the published unemployment rate was 10.0 percent and 15.4 million people were officially out of work.

Unfortunately, the official numbers do not include 9.2 million “involuntary part-time workers,” individuals working fewer hours or who were unable to find a full-time job. Also missing from the official total are 2.3 million people who were “marginally attached to the labor force”" These folks, says the government, wanted work, were available for work, and had looked for a job sometime during the prior 12 months. Still, they were not counted as “unemployed” because they had not searched for work in the four weeks before the survey.

Check out the unemployment numbers from your state and local business development offices. Until local numbers get better there's little reason to believe that foreclosure rates will meaningfully decline or that home values will significantly rise.

Looking Ahead
In the current environment we have historically low interest levels as well as falling real estate values. This is usually seen as a wonderful opportunity for real estate investors — unless we're sitting on a false bottom and prices are actually headed lower.

For what it's worth — and remember I'm not a seer, soothsayer or whatever — my sense is that in 2010 we'll see the following:

I also think we'll see the start of a massive government jobs program during the next few months, a timeframe made necessary if results are to show up before the November elections. Jobs are the key to more housing demand, fewer foreclosures and better corporate balance sheets — a reality that politicians in search of happy election results cannot ignore.

Posted by Dina Baxter's Blog at 9:10 AM No comments: